Three dimensional printing (3DP) is a manufacturing process that builds layers to create a three- dimensional solid object from a digital model. It allows for mass customization and complex shapes that cannot be produced in other ways, eliminates the need for tool production and its associated labour, and reduces waste stream. Because of these advantages, 3DP has been increasingly used in different areas. including medical, automotive, aerospace, construction, etc. 3D printing for civil structures can significantly reduce the construction time and cost.

However, unlike applications of 3DP in other areas, civil structures are typically large scale, with length or height spanning hundreds of meters. They are subjected to complex loadings, including gravity, wind, seismic, etc. Therefore, it is challenging to develop suitable printing tools and materials. As a result, 3DP of civil structures is still at a primitive stage.

This Three are Extrusion based techniques

The extrusion-based technique is analogous to the fussed deposition modelling (FDM) method which extrudes cementitious material from a nozzle mounted on a gantry, crane or a 6-axes robotic arm to print a structure layer by layer.

This technique has been aimed at on-site construction applications such as large-scale building components with complex geometries, and has a great potential to make a significant and positive contribution to the construction industry. A schematic of the extrusion based technique is illustrated in Figure

Contour crafting (CC) technology has been developed at the university of Southern California, USA. This technology uses the extrusion-based technique to extrude two layers of cementitious mixture to build a vertical concrete formwork. Custom-made reinforcement ties are manually inserted between layers (at every 30 cm horizontal and 13 cm vertically) while the CC machine is constantly extruding the layers. Trowel-like Gins are attached to the print head to create smooth extruded surfaces. Once the extruded formwork is completed, concrete is then manually poured to a height of 13 cm and a second batch is poured on top of the first batch after one hour. A one hour delay batch is to control the lateral pressure of the concrete by allowing it to partially cure and harden. 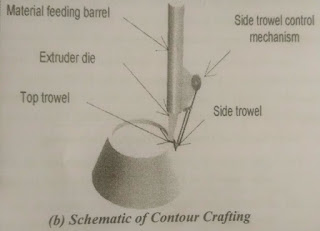 The superior surface finish and the greatly enhanced of fabrication. Other key advantage of CC is possibility of integration with other robotics methods for installing internal components such as pipes, electrical conductors, and reinforcement modules to enhance mechanical property. The CC technology currently produces vertical elements largely in compression. When doorway or window is required a lintel is placed to bridge the gap and the wall can be placed above. Therefore, it avoids the cantilever problem.

Drawbacks for the CC technology :

2. The initial formwork and trowel system can be rather complex to implement for production, depending on the size and shape of the object being printed.

3.The interrupted sequential casting of concrete within the formwork due to hydrostatic pressure and weak mechanical properties of the extruded concrete may result in weakened interfacial zones between the layers.

Concrete Printing technology has been developed by a team at Loughborough University in the United Kingdom. This technology also uses the extrusion-based technique and to some extent is similar to the cc technology.

However, the concrete Printing technology has been developed to retain 3D freedom and has, smaller resolution of deposition, which allows for greater control of internal and external geometries In addition, the material used in Concrete Printing is a high performance fiber-reinforced fine-aggregate concrete resulting in superior material properties to those obtained in the CC technology.

Concrete printing requires additional support to create overhangs and other freeform features. It use, second material, in a similar manner to the FDM method. The disadvantage of this process is that an additional deposition device is needed for the second material resulting in more maintenance, cleaning and control instructions and the secondary structure must be cleaned away in a post processing operation.

(1) The trade-off necessary for maintaining its dimensional accuracy makes the process quite slow with regards to the envisioned industrial application,

(2) Although the technology initially aimed at the veneration of 3D topologies rather than 2.5 D. the use of second material to support overhangs reduces the efficiency and flexibility of the process while increasing its material cost,

Contour Crafting and Concrete Printing technologies, while demonstrating many technological advantages, are subjected inherent limitations such as the necessity of using new and advanced machinery, small mineral some aggregate sizes (fine-aggregate mortar rather than concrete), and limited size of the printed elements (i.e. the size of the 3D printer must be larger than the size of the element to be printed). To overcome these limitations, a novel approach for 3DCP technology for on-site construction, named CONPrint 3D, is currently being developed at the TU Dresden, Germany, which intends to bring 3DCP directly into the building sites. The main advantages of CONPrint 3D technology are high geometrical flexibility, usage of commonly used construction machinery and low dependency skilled labour.

When compared with conventional construction processes, the application of 3D printing techniques in concrete construction offers the following advantages :

2. The cost of printing construction elements of houses is much lower than traditional construction methods. also material transportation and storage on sites is limited.

3. Reduction of on-site construction time by operating at a constant rate. Printers can operate 24×7.

4. Reduction of injury rates by eliminating dangerous jobs (e.g working at heights), which would result in an increased level of safety in construction.

6. Environmental friendly construction processes and the use of raw materials with low embodied energy (i.e. construction and industrial waste).

7. Increasing sustainability in construction by reducing wastages of formwork.

11. Avoidance of waste and reduced need for materials.

2. Only limited materials can be used by automated machines.

4. Using 3D printers on the construction site can cause building to be structurally weak because 3D printers print in layers. This can result in damage to buildings when they are exposed to high stress (wind, earthquake, gravitational force).

5. Using 3D printers on the construction site requires storage and transportation of concrete which is expensive.

6.3D printers require large amount of space around the construction site, which is not always possible.

7. Use of 3D printers on the construction site will take jobs from thousands of qualified workers.

Applications of 3D printing in Construction

The construction industry has, to date, adopted six main applications of 3D printing as under:

So far, companies have generally limited their efforts to smaller-scale buildings, especially compact single story houses.
In 2014, the Chinese Wensum company claimed to have built 10 basic houses in less than a day with the  area of each one being 195 m2. The company used a large extrusion based 3D printer to manufacture the house components separately off-site before they were transported and assembled on site. In 2015, the company also claimed to have built a 5-story apartment building with an area of 1100 m2, being currently tallest 3D printed Structure.

3D printing can take maximum advantage of topology and of the properties of metals and concrete – deal attributes for creating pedestrian bridges and perhaps eventually traffic bridges, too.
The first full scale printed footbridge opened in 2016, in a park near Madrid. The 40 foot (12 m) embodied. structure, assembled on site from eight printed sections of reinforced concrete.

Architects and designers like to make their mark by devising urban structures of unique shape and form that will define a city space for decades. These non-standard objects tends to be very pricey and time- consuming, However, when created by traditional casting. 3D printing holds the promise of greenly reduced lead times, costs and waste.
One front nunner in this field is the FreeFAB system of Australia. They uses 3D printing to create complex molds, which can then be filled with concrete to produce the desired objects.

Due to CAD and 3D printing, architects and designers can now add a personal touch to building components such as facades, joints, partition walls, and even power sockets.

Requirements of Concrete for 3D printing :

3D printing has been employed for the past 30 years and only recently, researchers have been experimenting different types of materials that suit for 3D printing. The research on material development for 3D printing has been the major challenge for the researchers involved in this specific area. The following key properties of concrete needs improvement in order to successfully 3D print concrete structures:

Using of concrete for 3D printing needs special type of concrete. The concrete mix should be flowable like a paste and should harden once it has been laid. The concrete should not harden rapidly while it is being used, because it would block the nozzle and disrupt the printing process. Thus, the open time of the concrete plays a vital role in the printing process. The terms extrudability, flowability and open time are directly co-related to the consistency and setting time of concrete. For the concrete to be optimized for 3D printing conditions there are certain properties of concrete, which can be modified and can be adapted for printing.

I Hope You Like Our Article ” CONCRETE 3D PRINTER ”  Don’t be Cheap To Share This Article with your Friends.