Skip to content
Plate Load Test
How Calculate Bearing Capacity and Settlement of Soil ?
Plate load test is a field test to determine the ultimate bearing capacity of soil, and the probable settlement under a given loading. The test essentially consists in loading a rigid plate at the foundation level, and determining the settlements corresponding to each load increment.
The size of square bearing plate may be 30 cm x 30 cm or 75 cm x 75 cm. The thickness of steel plate should not be less than 25 mm.
The test pit width is made five times the width of the base plate Bp
Bf  =  5Bp
At the centre of the pit, a small square hole is dug whose size is equal to the size of the plate. The depth of hole (Dp)should be such that,

The reaction of the hydraulic jack may be borne by either of the following two methods.

In case of gravity loading method, a platform is constructed over a vertical column resting on the test plate. the loading is done with the help of sand bags, stones or concrete blocks.
As per I. S. 1888-1962, a seating load of 0.7 t/m2 is applied and then released. The load is applied with the help of hydraulic jack, in convenient increments, say of about one-fifth of the expected safe bearing capacity or one-tenth of the ultimate bearing capacity.
Settlement of the plate is observed by two dial gauges fixed diametrically opposite ends, with sensitivity of 0.02 mm .
Settlement should be observed for each  increment of load after an internal of 1, 4, 10, 20, 40 and 60 minutes and thereafter at hourly intervals until the rate of settlement becomes  less than 0.02 mm per hour.
The maximum load that is to be applied corresponding to 1.5 times the estimated ultimate load or to 3 times the proposed allowable bearing pressure.

The load intensity and settlement observations of the plate load test are plotted in the form of load settlement curve.
Fig shows four typical curves applied to different soils.
Curve Iis typical for loose to medium cohesionless soil. It can be seen that initially this curve is a straight line, but as the load increases it flattens out. There is no clear point of shear failure.
Curve IIis typical for cohesive soils. This may not be quite straight in the initial stages and leans towards settlement exist as the settlement increases.
Curve IIIis typical for partially cohesive soils.
Curve IV is typical for dense cohesionless soils.
Curves II and IV have well defined points of failure (yield points) and as such there is no difficulty in arriving at the value of ultimate bearing capacity of soil in case of cohesive soil and dense cohesionless soils The load corresponding to yield point is taken as the ultimate bearing capacity of plate (qp).
In case of curve I and II where yield point is not well defined, the ultimate bearing capacity of plate may be calculated as discussed below
A load-settlement curve is plotted as shown in Figure, The ultimate load for the plate qp, is indicated by a break on log-log plot.
If the break is not well-defined, the ultimate load is taken as that corresponding to a settlement of one-fifth of the plate width (Bp). On the natural plot, the ultimate load for the plate qp is obtained from the intersection of the forward and backward tangents as shown in figure.
How To Determine Ultimate Bearing Capacity From PLT Observation ?

The ultimate bearing capacity of the proposed foundation q(f) can be obtained from the following relations
(a) For clayey soils :

How To Determine Settlement From PLT Observation ?
The plate load test can also be used to determine the settlement for a given intensity of loading. 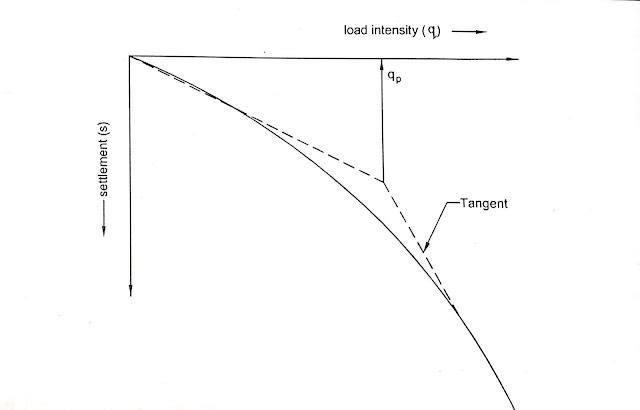 (A) for clayey soil

where, Bf and Bp are in metres.

In this method basically truss are made for supporting load. and with help of truss loading is applied. 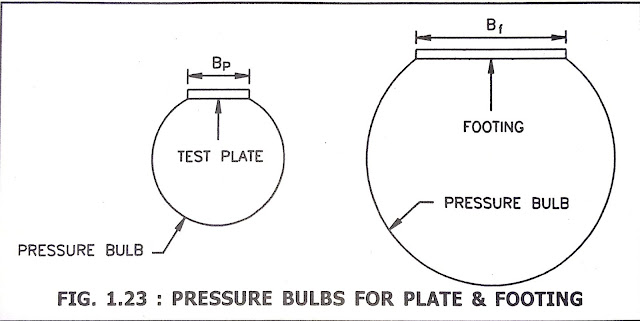 (2) Scale effect:
The ultimate B.C. of saturated clays is independent of the size of the plate but for cohesionless soils, it increases with the size of the plate.
To reduce scale effect, it is desirable to repeat the plate Load test with two or three different sizes of plates and take the average
(3) Time effect: A plate load test is a test of short duration. For clays, it does not give the ultimate settlement. The load- settlement curve is not truly representative.
(4) Reaction load: It is not practicable to provide a reaction of more than 250 kN. Hence, the test on a plate size larger than 0.6 m width is difficult.
(5) Water table : The level of W. T. affects the bearing capacity of the sandy soils. If W.T is above the level of the footing, it has to be lowered by pumping before placing the plate.
(6) Interpretation of failure load: The failure load is not well-defined except in the case of a general shear failure. An error of personal interpretation may be involved in other types of failure.
I Hope You Like Our Article “Plate Load Test-How Calculate Bearing Capacity and Settlement of Soil ?“  Don’t be Cheap To Share This Article with your Friends.